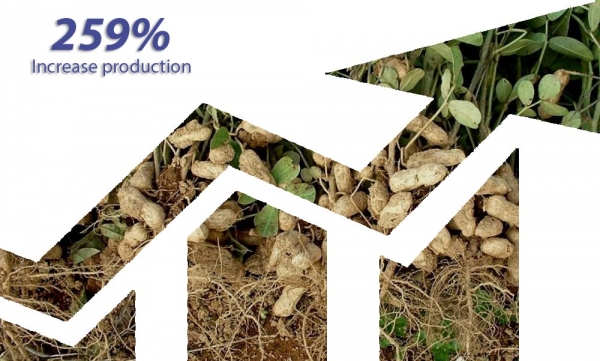 The cultivation of peanuts in Greece has been moving at an increasingly rapid pace for the past 7 years. After the vertical fall in the beginning of 1990 and following almost 2 decades (1992-2011) of low production, the cultivation of the Greek groundnut returned dynamically and in an impressive way.

A decisive role in the contribution of this impressive increase is the conversion of the farmers of the region of Serres to the cultivation of groundnuts.   The project of the company BIONOT, which from 2011, began to encourage and advertise the cultivation of peanuts and later in 2012 to establish a collection and processing unit in the area of Strimoniko Serres, began to yield almost immediately.

With BIONOT’s advisory guidance to the farmers, supervision, the knowledge of the chain of production and promotion and of course the arable land, the production in Serres Almost tripled within 6 years.

In contrast to the imported peanuts (mainly China and Argentina), the climate of Greece and the quality of the land of the plains of Serres give high quality peanuts, tasty and retaining unchanged their nutritional properties thanks to the direct processing and distribution in the local market.     In the graph below you can see the ratio of peanut cultivation to the region of Serres ( and the rest of Greece during the years 2011-2016 (graph 1).

The following graph is the annual analysis of the production of region of Serres from 2011 to 2018 * (graph 2).